The Limits of Methodism It is refreshing to discover that, for at least one very progressive bishop, there is a limit to how progressive a church can be before it ceases to be Methodist. Bishop Minerva Carcaño of the California-Nevada Annual Conference has been in the news for the last several weeks because of her confrontation with the leadership of Glide Memorial United Methodist Church in San Francisco, a church with a well-established reputation for being the largest United Methodist church in the Western Jurisdiction and among the largest in the United States.

Carcaño has refused to appoint any pastor to Glide this year in a dispute with the church that may even lead to the congregation’s attempting to leave the denomination. The church’s last senior pastor, the Rev. Jay Williams, lasted less than a year before resigning to return to his previous appointment in Boston. The two associate pastors on staff are being reappointed to other churches. No new pastors are being appointed to the church at this time, and the district superintendent is arranging for weekly pulpit supply and pastoral care.

The concerns that have led to this situation are theological, as well as financial and related to power and control.

The Rev. Cecil Williams served the church as lead pastor from 1964 until his “retirement” in 2000. In 1967 he removed the cross from the sanctuary in an attempt to make Jews, Muslims, Buddhists, Wiccans, and atheists/agnostics feel comfortable attending the church. According to Bishop Carcaño, however, it appears that in attempting to reach out to non-Christians, the very basis of the gospel was compromised.

In an open letter, Carcaño stated, “Leaders from these [non-Christian] constituencies are quick to publicly state that they do not want the Celebrations, or the church, to be United Methodist or Christian in any form. Sunday Celebrations are uplifting concerts, but lack the fundamentals of Christian worship. Baptisms are conducted periodically but in the name of the people rather than from a Christian understanding of Baptism. Holy Communion was done away with some time ago and only introduced back into the life of the congregation this past Spring, but outside of the Celebration gatherings and with much resistance. We seek to be in good and loving relationship with persons of other faiths and beliefs, and those who claim no faith. However, this should never cause us to lose our own faith.”

According to Carcaño, “the great majority of the participants at Glide’s Sunday Celebrations claim other faiths.” If Baptism has not been administered as a Christian sacrament, one wonders whether membership has been faithful to the vows mandated by the Discipline and found in the Hymnal. It’s possible that many of the over 13,000 members reported by Glide are in fact not even Christian and have not taken vows affirming Jesus Christ as Lord and Savior.

Additionally, “there are also serious concerns about the governance and financial administration of the church,” Carcaño declared. “The church has no organizational structure to fulfill its responsibilities as per The Book of Discipline, and has not had a United Methodist organizational structure for decades. The only body that functions in any leadership capacity is a group of congregational leaders hand-picked by Cecil Williams who have never been elected or recognized by the congregation.” 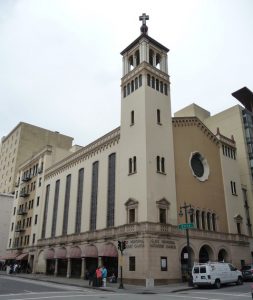 The question here is who really runs Glide Church? It appears that the Glide Foundation, formed by Williams in 2000, is really the governing entity for the congregation. The Foundation receives millions of dollars a year for the social outreach ministry of the church, housing and feeding the homeless, providing ministry related to HIV/AIDS, and many other worthwhile projects. In a guest editorial in the San Francisco Chronicle, Williams stated: “The Glide board of trustees controls the foundation’s resources, of which 95 percent support social programming, and 5 percent go toward church activities.”

Responding also in a guest editorial in the Chronicle, Carcaño wrote, “In May, I attempted to appoint a senior pastor to Glide Memorial who was welcomed by the congregational leaders, but rejected by the Board of Trustees of the Glide Foundation.” So the Foundation apparently controls the church.

Behind all of this lies the former lead pastor, Williams, and his wife, Janice Mirikitani. Despite the fact that there have been four lead pastors appointed to the church since 2000, including now-bishop Karen Oliveto, Williams has continued to maintain leadership of the church and the Foundation. Carcaño described it this way: “No pastor has been allowed to exercise their rightful authority or responsibilities while serving at Glide. To this day, Cecil Williams and his wife, Janice Mirikitani, make all decisions in the background at Glide.”

Bishop Carcaño should be applauded for attempting to bring Glide back into compliance with the United Methodist Discipline. I’m glad she stated in her editorial, “As United Methodists, we respect all faiths, love all people, and are committed to working with persons of other faiths and goodwill to make the world a better place. We also want to sustain our beliefs as Methodists.”

This is exactly the kind of accountability and supervision that has been lacking from many of our bishops in recent decades. One wonders where the seven bishops were who presided over the California-Nevada Conference prior to Carcaño, while all of this was developing. Since 2000, Bishops Beverly Shamana and Warner Brown should have at least stopped Williams from continuing to exercise pastoral authority when no longer the appointed pastor to the church. Indeed, in many parts of the country, a pastor who retires from a congregation is not allowed to even participate in his or her former congregation for a period of at least a year and in some cases never.

At this point, it is impossible to say how this conflict might turn out. It will be interesting to see if Glide can be brought back under the umbrella of United Methodism, or whether they have departed so far from the doctrine and governance of our church that restoration is impossible. But reasserting the denomination’s discipline and reestablishing healthy theological and structural boundaries are struggles worth having.

No one ought to confuse Bishop Carcaño with being a card-carrying evangelical or even a consistent upholder of the order of the church. There are many other ways in which Carcaño is not abiding by the Discipline. And this act of attempted accountability does not mean revival is around the corner. Even if Glide is restored to the church, it will never be conservative in theology. However, Carcaño’s willingness to exercise the accountability expected of her office as bishop demonstrates that it is possible to hold one another accountable in love for the sake of the mission of the church. If all our other bishops were willing to consistently and fairly follow her example, it would go a long way toward restoring the trust in the Council of Bishops that has been so thoroughly shattered.

For the sake of the gospel and the reputation of The United Methodist Church, we should all pray for her endeavor.

You can read more extensive coverage of the Glide situation here and here.